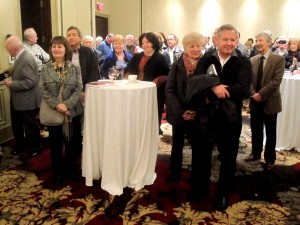 WARFLEET PRESS publishes books about unique British Columbians. We hope their stories will contribute to building a stronger Canadian identity (nationally and internationally).

From the colossal achievement of one man’s ambition to do something that others said couldn’t be done (The Life & Times of the Legendary Mr. D) to a legendary Canadian commercial aviation company that today represents one half of Canada’s commercial aviation history (The Rise & Fall of Canadian Airlines – An Insider’s Story)  to the life stories of an immigrant who became a close friend to many of Vancouver’s business establishment in the sixties, seventies, eighties and nineties (My Greek Barber’s Diary) they represent the best in B.C and Canada’s spirit and accomplishment.

The Life and Times of the Legendary Mr D was published in the spring of 2014. It is the complete story of the Vancouver Boy’s band (aka Kitsilano Boys’ Band) and the band culture in and around Vancouver from the early 1900s to the present. It covers extensively the 14 tours the Kitsilano Boys’ Band made to England and Europe from 1934 through 1974. It is also the first book on the history of the youth band movement in Canada.

The above book took one and a half years to write but the research on the book took over 25 years. Other books in this series were published as material came in and they are listed below and available.

(1) By Jove What A Band is the story of Arthur Delamont and his world famous, Vancouver Kitsilano Boys’ Band. This vignette style book was the first in print and is a short over view of the band’s story.

(2) The Red Cape Boys is a collection of thirty chapters on 30 of the more famous boys from the band. Many are from the 1930s period: Dal Richards, Jimmy Pattison, Bing Thom etc. (Over 125 boys were interviewed for the books and their stories were so interesting that each was made into a chapter and put into a book). There are three books of the boy’s stories. They are The Red Cape Boys, Denton Park and The Lost Chord.

(3) Denton Park has twenty chapters on the 1950s boys. The band made four trips to England in the 1950s. The longest was five months. On one they were booked into the British Vaudeville circuit and played in Vaudeville houses throughout England for four months.

(4) The Lost Chord has twenty chapters on the 1960s and 1970s boys. By the mid-sixties the band’s director was in his 80s so he started taking tours every two years rather every four which had been his custom. From 1966 through 1974 the boys traveled to Europe every other year for 2 months.

(4) Woodwinds, Brass & Glory is a pictorial record (photo album) of Arthur Delamont and his band, with 500 photos on 300 pages.

(1) My Greek Barber’s Diary is the story of one of Vancouver’s venerable downtown characters and a Vancouver national treasure. For 50 years George Chronopoulos cut the hair of Vancouver’s business elite. His Riviera salons, first on Seymour Street and then in the Royal Centre beneath the Hyatt Hotel were a focal point for generations of Vancouverites and the downtown business establishment. He has many stories to tell!

(1) The Inside Story of the Rise and Fall of Canadian Airlines is one man’s story, ‘Sid Fattedad’. Loved by all during the almost 30 years he spent with CP Air and Canadian, he rose to VP of the Pacific Division and then VP of Quality Control. After he retired came back to Chair the Committee that tried to save the airlines before it merged with Air Canada. This is a real Canadian aviation story told by someone who was there in the boardrooms. The inside story has never been told until now! This is a very important Canadian book which we feel should be in every public library in Canada. It is the only written history of this airline in print and represents one-half of Canada’s commercial aviation history.

To purchase a copy of any of our books, send us an email to chrisbestbyjove@yahoo.ca.

(1) Hearts, Minds & Souls profiles 23 of British Columbia’s career public school music educators. Most of these educators taught during the Golden Age of B.C. Music Education 1960 to 1990. Their stories tell how they fell in love with music at a young age and decided to go into a career teaching kids to play or sing music. Their stories are all heart felt and touching and legions of kids, many who have become music educators themselves, attest to how important music education was in their young lives.

This is the first book in a series that will see at least five or six books of music educators stories being compiled. They will serve as a resource library for future music educators.

Welcome to the official website for Warfleet Press – Books on Unique British Columbians. This site is easy to use. Scroll down the book covers in the middle of our Home page and click on the one you want to read the synopsis of and a brief excerpt.  Or, below under Posts I Like, you can click again on the book title you would like to read.  Our latest book came out in March 2021 and is called the Face of Multicultural Canada. There are six books on Arthur Delamont and his Kitsilano Boys Band. Below the list of books, you will find several blog sites. The most popular are the one on the Kits Band, the Handsworth Alumni and the Beefeater Band.  Christopher Best